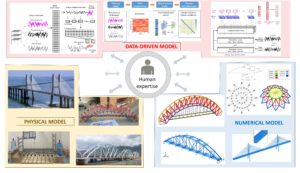 At London Digital Twin Research Centre, we have engineered a Digital Twin (DT) model for Structural Health Monitoring, which is able to collect, analyse, and visualise data in a near real-time fashion. The cloud-based DT was trialed at this initial stage on Amazon Cloud services (AWS) (continuously deployed at the following IP address: http://3.140.199.12) and currently being developed over the Siemens’ Mindsphere platform. For more detail of work flow and main components, read on.

In general, a DT application consists of two parts: the physical part and the digital part. The latter can be further divided into the numerical part and data-driven part as herein, to leverage the advantages of both the conventional numerical method and novelty artificial intelligent (AI) algorithms. The DT app allows data to be captured live onto the cloud-based platform. The demo has been run with vibration data of bridges as one example.

The real behaviour of the physical bridge is monitored via a system of sensors mounted along a model bridge. The most commonly used sensors are the accelerometers, which could capture the vibration accelerations of essential points with a predefined sampling frequency. The measured data can go through a preprocessing component to remove noises before storing in SQL relational database on a cloud service, which is Amazon Cloud in this example. A lightweight Data Analytic model using only statistic features and an advanced Deep Learning algorithm are developed together to assess the current state of the bridge and identify potential defective components before the damage spreads widely and becomes more severe. There is also a function for assessing the state of individual structural components other than the global structure of the bridge, using a simple but effective computer 360-degree image comparison technique. If significant differences between the images of latest structural states with their reference ones are recognised, damage of individual structural component can be detected. The outputs of the DT demo include a visualised threshold of damage which helps monitors the (near) real-time state of the bridges.