Since its launch in February 2019, the Newton-funded project “Digital twin model for structural health monitoring (SHM) of lifeline infrastructures in Vietnam” has achieved major milestones, including the data collection and vibration measurement of structures. In the last few months, the Vietnamese partner has conducted vibration measurement of two of the most heavily used bridges in Vietnam- Chuong Duong bridge in the Northern capital Hanoi and Can Tho bridge in the Southern Mekong Delta region. Let us look back at how it was done.

Located in Hanoi, Chuong Duong bridge carries a four-lane traffic road (No. 1A National Road) – two lane in the middle for cars and bus while two others on the side for motorcycle overlooking the Red river. Main structure system is a truss bridge with 21 spans with 11 steel spans and 10 concrete spans. The main truss bridge was designed and constructed by Vietnamese engineer from 1983 to 1985. Under the initial design, the bridge was intended for the circulation of 7,000 vehicles daily, however, it is now bearing loads of three- to four-fold the initial estimate. To evaluate the current state of the truss bridge, our partner from UTC has carried out vibration measurement by piezoelectric sensors with 50 measurement points along the bridge. The measurement data is currently being analysed and before compared with the simulated data for damage detection of the bridge.

In September 2020, the UTC team conducted vibration measurement on Can Tho bridge in the Mekong Delta region of Vietnam. Being inaugurated in 2010, the bridge was the world’s seventh longest cable-stayed bridge and the longest cable-stayed bridge in South East Asia with the main span of 550 m and a total of 216 cables. This is one of the largest bridges the team has worked with, and it took more than two weeks to complete the measurement of the bridge. The measured data, along with the existing data from the SHM system of the bridge will be briefly analysed by researchers from both MDX and UTC team for the evaluation of damage. 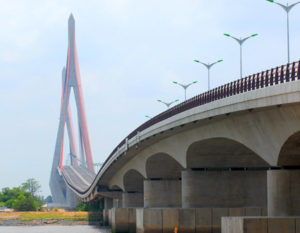 Beside the two bridges above, the team also plans to carry out vibration measurement of other bridge and dam structures in the coming months. This will ensure a solid database for the project in order to develop a complete digital twin model of lifeline infrastructures in Vietnam.